Introduction: No currency has ever been used in the human history which did not have the stamp of an authority. Bitcoin is a medium of payment but it is not money for the same reason. Nonetheless, the technology underlying Bitcoin is a significant one with great potential. A central bank, issuer of paper currency, can use some selected components of Bitcoin technology to replace paper currency with virtual currency, retaining all the important features of paper currency. The most important of them is that a central bank note is a freely negotiable bearer bond and a legal tender in the hand of its holder. It does not require any third party verification. Counterfeiting a central bank note is not impossible but difficult and costly. The central bank neither authenticates any transaction made with that particular note nor does it keep any record of that transaction. The note remains as a liability on the book of the central bank till it comes back to it, either for reissue or its destruction. The physical nature of the note ensures that no double spending is possible with the same note by its current holder. In case of digital cash, the main issue that a central bank has to resolve is the issue of double spending without depending on third party verification of the same. What follows hereunder is an outline of a system that any central bank can implement to issue its own currency retaining most, if not all, of the desired properties of a paper currency.

I am presenting below a system based on digital currency on a mobile phone. There is no compelling reason to believe that the same system cannot be implemented on a specially designed smart card with embedded chip. The system outlined below is described within the currency management framework of the Reserve bank of India (RBI). With little tweaking the same can be customized by any central bank.

RBI carries out its currency management function through its 19 Issue Offices located across the country. There is a network of 4281 currency chests and 4044 small coin depots in selected commercial bank branches. These chests store currency notes and rupee coins on behalf of RBI.  The note distribution mechanism is summarized in the following diagram. 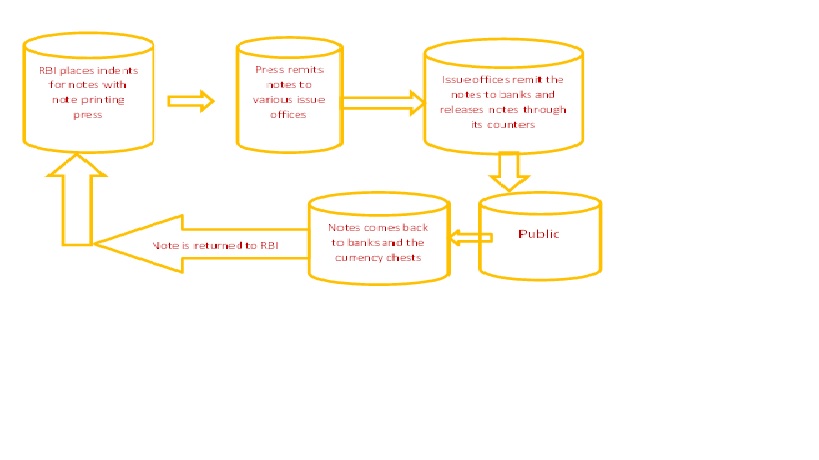 Every bank branch would have a digital cash dispenser. Any wallet holder would be able to replenish her wallet with digital currency by pairing it with the dispenser via Bluetooth or NFC communication channel.  Similarly every ATM would have similar facility. At the time of cash dispensation from bank branch or ATM would require Aadhaar based biometric verification of wallet.  For cash transfer between wallets of two individuals this verification is not a necessary requirement.

The protocol for issue of eRupiah

The wallet will have the following features:

How the system will function:

Alice downloads the mobile app/wallet from RBI website. Alice visits it nearest ATM or bank branch and loads its wallet with required e-Rupiah. On a single day Alice would not be allowed to load her wallet with more than, say, fifty thousand value of e-Rupiah. The cash dispenser, say ATM, would be configured accordingly.

Alice wants to pay, say one thousand rupees, to Bob; the Alice keeps her wallet bearing mobile to Bob’s wallet and taps the application on her mobile. The respective apps recognize each other and Alice keys in the amount to be disbursed to Bob. If Alice has necessary denominations then the application would give nearest amount higher than that amount and which can be transacted. The balance can be paid back by Bob.

In case of loss of a wallet, the holder of the wallet would be required to register the loss with RBI and provide its mobile number and Aadhaar number. RBI would broadcast the IMEI no of the wallet to all mobile service providers, thus blocking any further use of the mobile.  In due course, the stolen wallet can be traced and, in case of theft, required action by law enforcing agencies can be initiated. If a fraudster wants to use a stolen wallet by replacing the original header record, it would need to replace all unpaid notes’ records with values consistent with corresponding values of the new fraudulent header record. This would be very costly and may not be worthwhile. Furthermore, it would not be possible to download any further notes from an ATM or a bank branch.

As on end March 2017, around 201 billion pieces of notes including coins (one rupee and above) were in circulation.  In that year, India’s adult population (15 years and above) was estimated to be around 916 million. If all adults hold one wallet each, the estimated size of all header records would be around 320 GB, not a very big number by any yardstick.  The size of transaction database, assuming 1000 transaction for each note during its lifetime, would be around 71 petabyte or .07 Exabyte. Amazon Redshift Spectrum Query service charges $5 per Terabyte of Query. If in the extreme case we assume that all notes are transacted once every day of one year, then the cost would be around 132 million US dollar or 862 crore of Indian rupees.  Taking storage cost, it would be well below the cost of printing notes that RBI incurs today.

With digital currency it would be very difficult for anybody to make huge cash transaction for drug trafficking, bribing and other illegal purposes. In the Netflix original TV serial Narcos, the Columbian drug cartels are seen to carry out most of their transactions in cash. So much so, they had to store cash buried in fields.  Central Bank Digital Currency would be the most effective antidote to cash mediated corruption and illegal transactions.